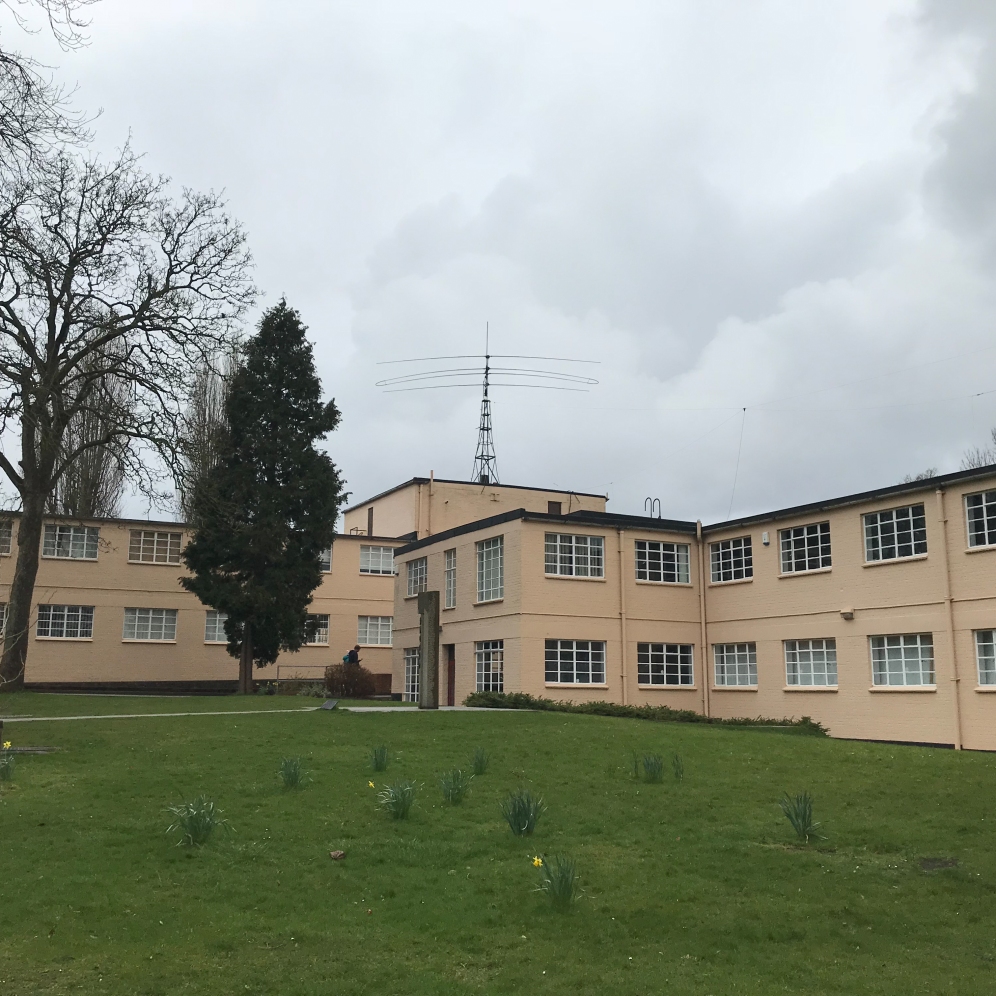 Like any good nerd, I used my long holiday weekend for an educational field trip. Alan Turing and Bletchley Park have long fascinated me. It was an obvious choice for a dull, and rainy free day.

Upon arrival, you are greeted by Bobby’s ode to her time at BP being a punch card operator. She sets the scene of an assortment of odd balls and eccentrics  doing their part for the war effort. Scorned by the locals, misunderstood by those who needed them, and absolutely vital to victory. As I walked the campus, I immediately recognized the type of place it was. The lovely grounds were crowded with functional cement block buildings that spoke of cheap and rapid construction and the trust in institutions that still held in the 40s-50s. A large arial antenna perched on the largest building, like some sort of flag pole for engineers. It looked like the science departments from so many universities. It felt like the goofy assortment of characters you would see on any tech campus. It felt like the engineering buildings where my father and grandfather worked.

In short, it felt really good to be there.

Hut 8, where Enigma was broken

As I walked the campus and digested more of the stories, I was getting frustrated. Google has sponsored part of the exhibits and had a sign that talked about honoring the diversity of Bletchley Park. Truly, it was a different place than most of the rest of the world, back in the 40’s, and sadly still today. Desperate for talent, nepotism and the old boys club couldn’t fill the bill. They had to find actual talent. The traditional channels don’t get you the weirdos; the ones who like to do math all day,  who get lost in tedium, and who are happy work amongst other weirdos.

The people, like buildings, resembled other high pressure laboratories; from college science laboratories to the silicon valley campuses. They couldn’t turn away people if they could do the job. All night and day, women rode in from across the country on motorcycles to deliver recently intercepted messages from the enemy. (Men who could drive motorcycles, were usually off in the war.) Professors, students, house wives, unmarried daughters; anyone with the knack for details and the stamina of a computer would have been pulled to BP.  Seven days a week — the war didn’t know weekends.

To make life bearable, BP brought in entertainment. The teams put on plays, held dances, formed bands. Proof that even in most “sciencey” of places, the humanities are essential.

Long story short: BP cracked impossible codes, shorted the war by years, and saved tens of millions of lives. So why was I so sad?

Where were all of the geniuses now? Where was the respect for talent and acceptance of eccentrics? To think so much brain power had to go to stop a war. (Which I am very glad that it did). Imagine if we used that talent to cure disease, stop famine, create the logistics to ease mass suffering. Today, Google is arguably the largest employer of genius, and it has a majority of Earth’s brain power figuring how to to get people to click more ads.

I couldn’t help but walk through BP and see not just a monument to the people who worked there, but a shameful reminder of humanity’s intolerance. After the war, the eccentrics were cast out, the women sent back to their  kitchens, and the acceptance of odd balls was no longer needed. The UK, and the rest of the world, tried to put back the clock to before.  The most famous and tragic story is Alan Turing, who invented the concept of a computer and used his ideas to help crack the war’s most impossible codes. After the war he was found guilty of homosexuality and chemically castrated. Depending on who you ask, he either committed suicide at age 41 as a result of the hormone therapy, or was assassinated by his own government as a security risk. 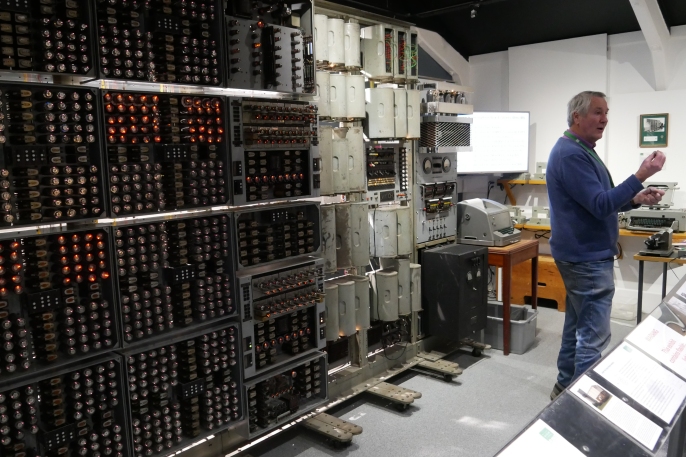 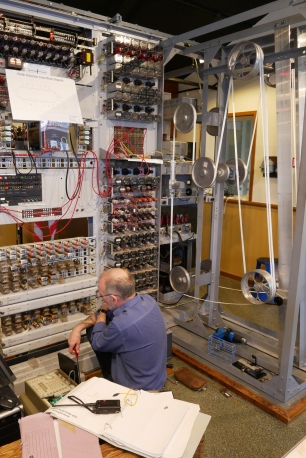 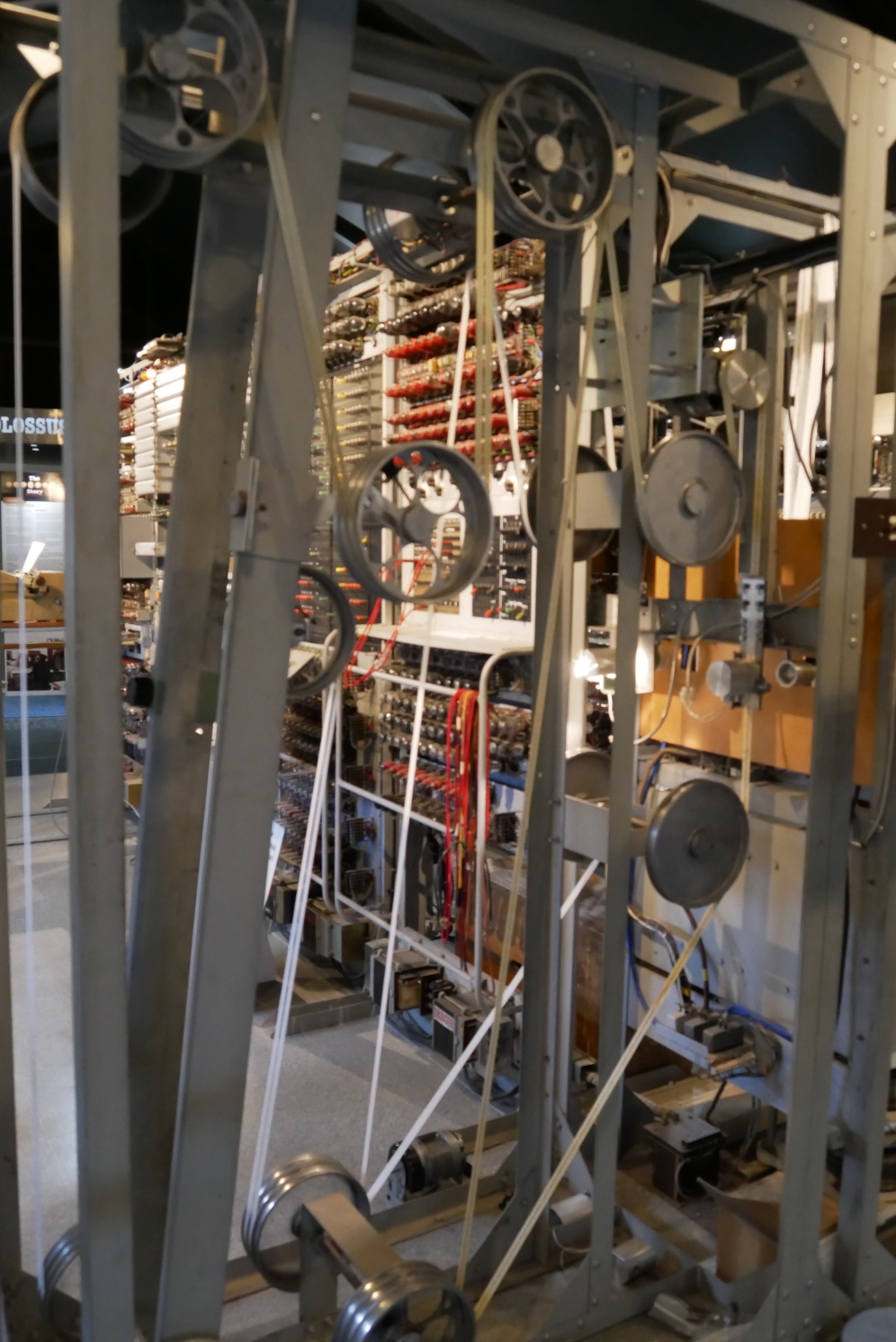 In a funk, I headed over to the Computer History Science Museum to be greeted by another friendly staff and a very underwhelming building — public institutions have that look. Inside, I found a working reconstruction of Colossus, the first electronic computer, the beast that broke the cyphers for German high command and beat ENIAC by two years. But was classified; so like most of BP, the labors and people behind them fell into obscurity. The staff and volunteers at CSHM reconstruct the machines to reconstruct the history.

It was here I met a man who programmed on the WITCH (Wolverhampton Instrument for Teaching Computing from Harwell), the fifth electronic computer to be created. It was built for reliability over speed, hence it is still up and running, and being programmed, today. It is essentially a CPU with no OS running a proto-assembly language. Since 1951, the beast ran on about half a kilobyte of RAM, and lit up the imagination of all who saw it’s dekatron memory. You can actually see the blinking lights as each address is access and functions carried out. It was a giant signpost pointing to an information super future.

The man showed us a hand calculator, and deftly walked through some expert tricks to carry out math in a few minutes that could have taken tedious hand cranked hours. He showed how those techniques built the WITCH. He talked about how far computers have come. He reminded us that when people invented these things, they never knew what they could be used for. When IBM started doing computers, they could only imagine five in the world!

When you remember that computers used to be giant, expensive, and brittle devices that took armies to run — that made sense. He said that quantum computers today looked like electronic computers from 60 years ago, or lasers from 40. He challenged us, it is the next generation who grows up with the technology that can see past it’s inception to imagine it’s potential! What could we imagine with his work? How much further could we see on his shoulders?

Here was an older man, not afraid of the future nor angry at the youth for having it. He was excited. People are good. The future is ours to claim. Humanity is the struggle to better ourselves. Science is culture. It seems like not all of the geniuses and eccentrics have left Bletchley Park, and they continue to do very important work.